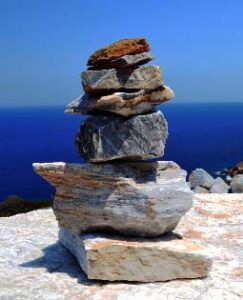 Homer’s Tomb is located in the northern part of Ios Island, near the beach of Plakotos. The great Greek poet Homer is said to have died on the island, and Homer’s Tomb is now one of the most famous tourist attractions in Ios Greece. There are several stories – one that Homer’s mother Klymeni was from Ios, another that he died of ill health on Ios, and the third is that the locals had to kill him as he couldn’t solve a puzzle.

The tomb itself is about a 300 metre walk at the top of the hill. There is a small square structure built of stone and marble, about 1 metre high. There is a marble plaque which reads “HERE THE EARTH COVERS THE SACRED HEAD OF MEN AND HEROES HOMER THE DIVINE POET“.

The tomb is accessible by car or scooter, and there are spectacular views of the Aegean Sea and nearby islands from the site too.

There is also a statue of Homer in the port of Ios Greece, at the bottom of the donkey steps.